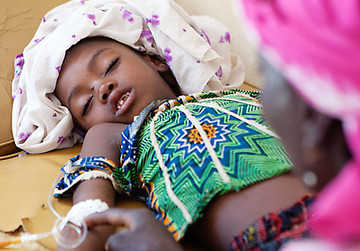 Niger belongs to the five less developped and poorest countries in the world. Droughts, plagues of locusts, desertification and a high population growth cause severe famines for decades. Particularly, there were many victims during the drought catastrophes of 1980 to 1985, 2004 to 2005 and 2010.

Many more than half of the population live in poverty. Often, the men leave their homes in order to find work in neighbouring countries. After some time, they come back to their families - mostly contracted with HIV. The result is a dramatical increase of new infections and of AIDS orphans.

Since 1991, the SOS Children's Villages are working in Niger, afther the ministry of social affairs provided a property on the brink of the capital city, Niamey, in 1990. Today, there are three SOS Children's Villages in total in Niger, a SOS youth institution and each three SOS Kindergartens, SOS Schools and SOS Social Centres, whereof two with an integrated medical centre. In total, SOS in Niger supports more than 10,000 children and their relatives.